Found some inspiration in these brilliant red scissors and shadow. Definitely a challenge--I do love the way it came together. Am always surprised at how cool keeping it simple can be. 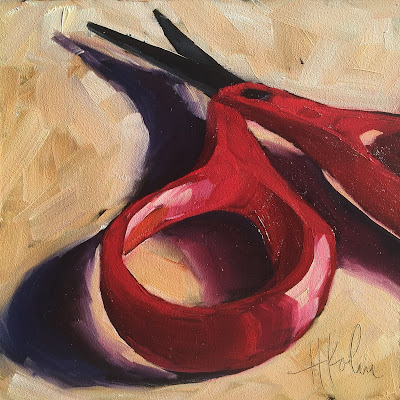 Posted by Hallie Kohn at 2:10 PM No comments:

Had an amazing trip to San Francisco and Napa this past summer. I love outdoor adventures, and this is especially true while traveling. My friend and I decided to rent bikes and ride from Napa to Yountville; such a great way to see the vineyards up close while getting a little exercise. We would stop and get photos along the way, and one of my favorites was of our bikes parked in the shade next to these beautiful flowering trees. 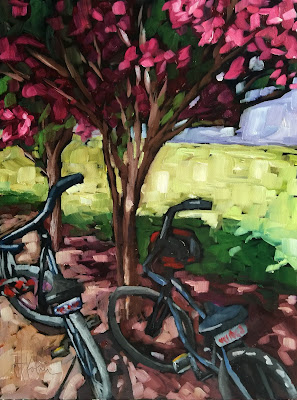 Posted by Hallie Kohn at 9:01 AM No comments:

Wine is one of my favorite indulgences. Thought it might be fun to paint the necessary tool. Can you imagine if you had a bottle and a glass, but no opener?! 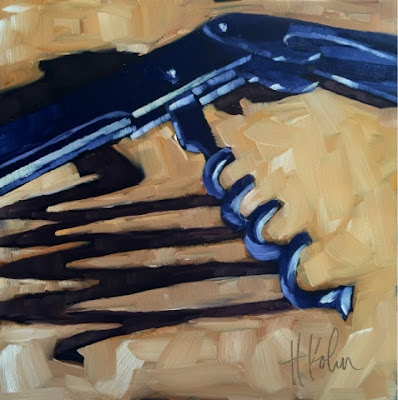 Posted by Hallie Kohn at 6:36 AM No comments:

This large prism hangs above my kitchen sink. It was given to me two decades ago by a friend and I've always treasured it. The other day I took it down to clean and the sun lit it all up, casting little rays of light under it. It felt quite festive and magical. 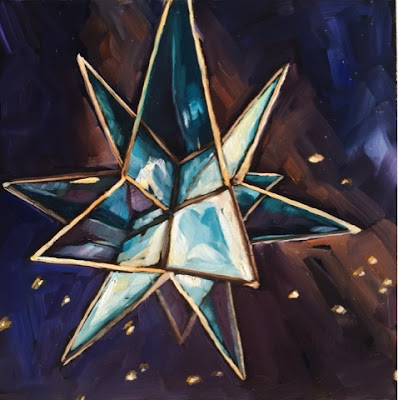 Felt like it had been a bit since I'd painted (or seen!) flowers. These just make me happy. 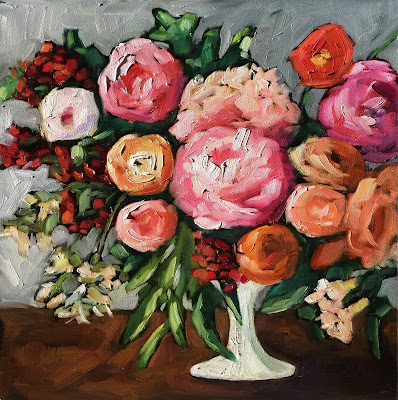 I was always told that custom art deserves a custom frame and do actually agree. The great news is that frames can be found (or made!) for so much less today. Because many artists paint on flat panels, these "floater frames" are such a great option and look so amazing.

I ordered this one ready made to fit my 8x8" painting. It came to me fully assembled with wire and hardware. All I had to do was put some super glue in the four corners and set the art in to dry. It looks great and absolutely none of the edges of the painting were covered by frame! Love that! 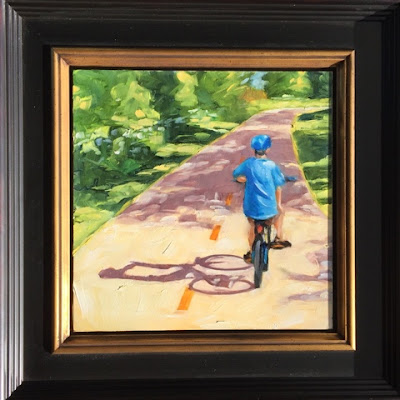 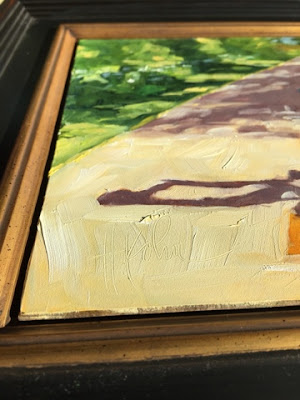 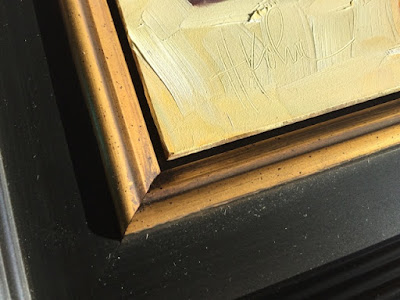 Was feeling in the Christmas spirit and decided to paint a beautiful angel two ways. Think perhaps I could have done even more--she was so great to paint. An interesting perspective makes these so appealing to me; I can't decide which one I like better! 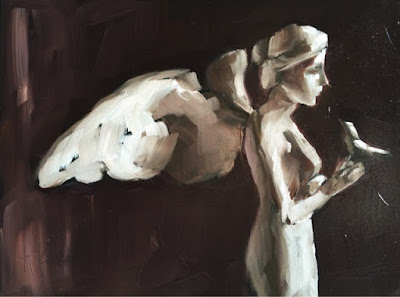 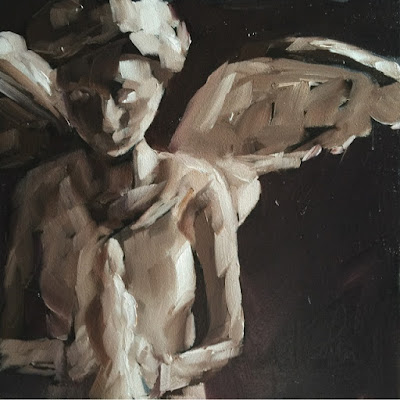 I know what you're thinking and you're right. There should definitely be a table to rest your drink on. 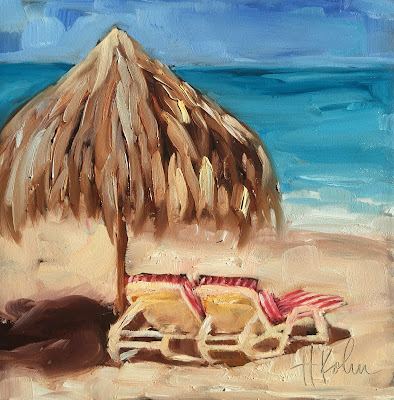 Posted by Hallie Kohn at 9:33 AM No comments:

My husband and I stopped at this cool bar for lunch while driving through Indiana. We saw this shiny long game table with the light reflecting onto it so beautifully. We just had to check it out.

The game itself is definitely not as easy to play as it looks--that board is quite slippery! 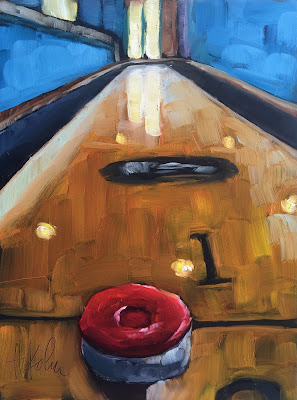 My husband and I had expresso for the first time while in Italy about 10 years ago and have loved it ever since. You'd think it would be bitter and strong, but it is actually sweet and full of delicious flavor. My only complaint is that I always want there to be more! 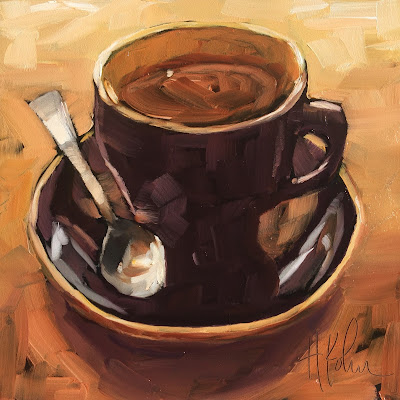 Posted by Hallie Kohn at 5:58 PM No comments:

Church by the Side of the Road

That really is the name of the church! It is the most intimate, quaint little church I've ever had the pleasure of being inside. The happiness felt while painting it has to be just like cooking with love. 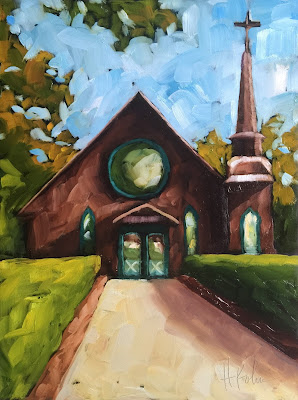 Well, we call it "red juice" at our house, but it is usually pomegranate blueberry or something equally delicious. The sun was shining through it on the breakfast table, and one of my boys pointed the light out to me. It called to be painted and was a very fun challenge. I just love the colors!

I'll bet you didn't know that I have a slight glass addiction. It's true. 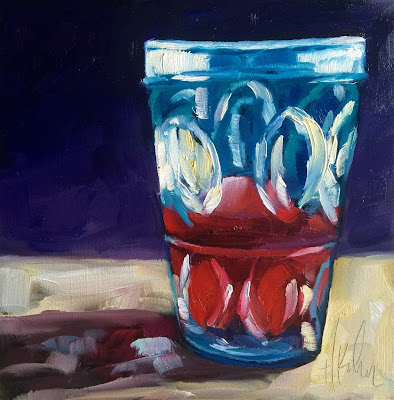 There is a historical building that had been boarded up for decades in my town. The building itself has always been a mystery. Recently the building was purchased and restored by a local family. Renovations have been going on for many many months and of course exciting details traveled from ear to ear. What would it look like? Would the original details be restored? When would it be finished? What would it be used for?

There was an open house inviting all of us curious types to come and view the space, which was completely breathtaking, open and restored beautifully to its original splendor. While speaking with some of the purchase family, I learned the style of the building which is Second Empire Baroque (also referred to as Napoleon III) and most popular around 1870. I was definitely inspired and decided to paint the crown of Napoleon III, intricate and jewel-laden, much like this jewel in our town. 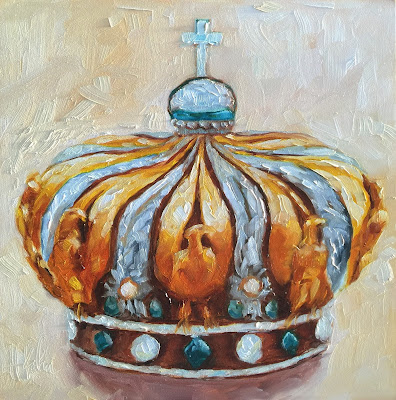 While visiting my sister, we shopped for a picnic lunch and wine to take to Baker's Beach. I had no idea the view of the Golden Gate Bridge would be this spectacular. There was not one cloud in the sky, and although it was cool enough to be in warm clothes, my shins received a sunburn that lasted for weeks! I just know if we hadn't polished off that bottle of wine I might have noticed! ;) 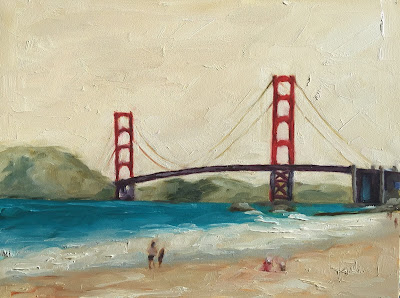 Posted by Hallie Kohn at 9:12 AM No comments:

A Star on Stage

My older son loves star fruit and we had some in the house. The sun was shining and this one just came to life when I "staged" it! Thought it fit the title perfectly and seemed to just glow. 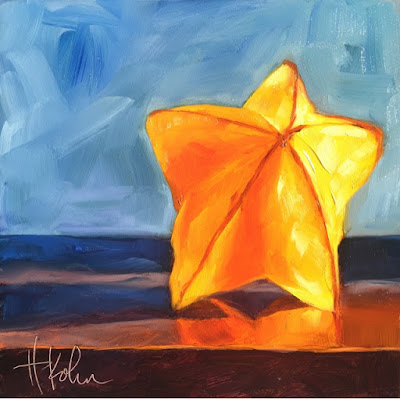 Posted by Hallie Kohn at 5:51 PM No comments: 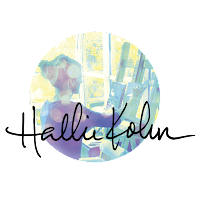 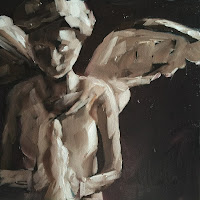